Section 144 imposed in 50 districts of Madhya Pradesh after violence by anti-NRC, CAA protesters

BHOPAL: Curfew has been imposed in four police station areas and section 144 imposed on 50 out of the 52 districts in the state after anti-NRC and CAA protesters indulged in series of violence in various parts of Jabalpur town of Madhya Pradesh.... 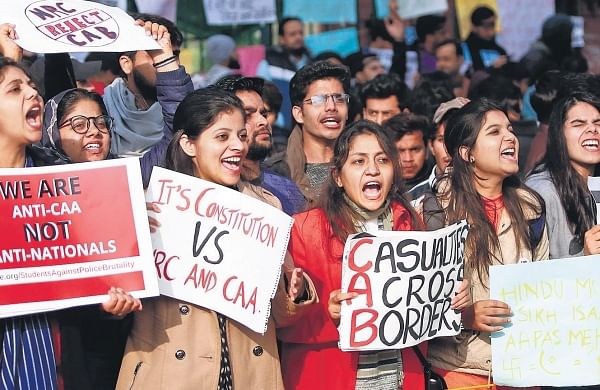 BHOPAL: Curfew has been imposed in four police station areas and section 144 imposed on 50 out of the 52 districts in the state after anti-NRC and CAA protesters indulged in series of violence in various parts of Jabalpur town of Madhya Pradesh.

Curfew was imposed in four police station areas of Jabalpur town, including Adhartal, Hanumantal, Gohalpur and Kotwali police station after anti-NRC and CAA protesters pelted stones at the police and damaged several vehicles, including police vehicles.

The incident happened after completion of Friday prayers, when those returning dispersed into various areas as leaderless crowd and tried to progress in form of procession.

When police stopped them, the leaderless mobs indulged in stone-pelting in various localities, including Milloniganj, Razaq Chowk, Raddi Chowk, Bahorabag and Gohalpur areas.

Shockingly, those who indulged in stone-pelting on cops and vehicles, also included boys aged between 7 and 15 years.

“Children and teenagers aged between 7 to 15 years, who may have no knowledge about NRC or CAA pelted stones on the cops, but the armed police personnel maintained cool and didn’t resort to firing. The age group of the boys (covering their faces with masks and scarves) who indulged in stone-pelting clearly suggests that they were misled and motivated to indulge in violence. Right now our priority is to bring normalcy, owing to which curfew has been imposed in the four police station areas as a precautionary measure,” Jabalpur district police superintendent Amit Singh said.

While the police didn’t open fire on the violent mob, tear gas shells were fired and force was used to scare them away.

Singh added that more than 10 police officers have been injured in stone-pelting in various localities and some of them have been hospitalized as well.

A peaceful gathering took place at Tarjuma Mosque in Bhopal over NRC-CAA earlier in the day, while thousands of protesters shouted anti-NRC and CAA slogans outside on adjoining street and lanes.

No incident of violence was reported from anywhere in the Old Bhopal city owing to strong police presence.

Importantly, prohibitory orders under Section 144 of CrPc have been clamped in 44 out of the 52 districts, including Bhopal, Jabalpur, Indore and Gwalior. All processions have been banned and leaves of all police personnel have been cancelled.

(With inputs from ANI)

Govt open to pre-budget suggestions to revive economy after...

Thane: A seven-year-old girl was raped and bludgeoned to death with a large stone...

Q: What is e-invoicing?A. The Government has announced new e-invoicing systems under...

Ranbir Kapoor and Deepika Padukone to play cameos in Alia...

London: Toni-Ann Singh from Jamaica was on Saturday crowned the 69th Miss World,...

Mangaluru: The Mangaluru City police on Tuesday released a series of video clippings...

Facebook on Thursday said it is investigating a report that a database containing...

There is currently speculation that the government might miss its GST tax collection...