NEW DELHI: Most packaged food and fast food items being sold in India contain "dangerously" high levels of salt and fat in them, according to a new study. The laboratory study by the environment think-tank Centre for Science and Environment... 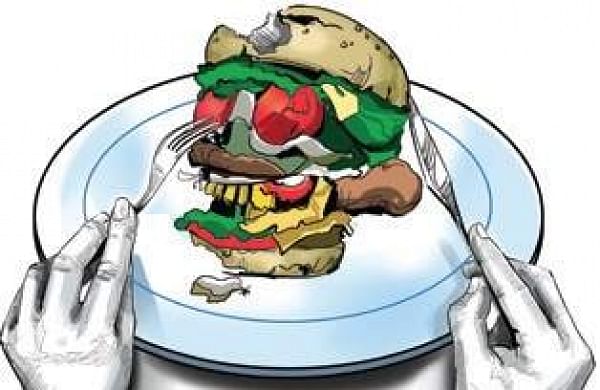 NEW DELHI: Most packaged food and fast food items being sold in India contain "dangerously" high levels of salt and fat in them, according to a new study.

The laboratory study by the environment think-tank Centre for Science and Environment (CSE)found that the levels of salt and fat in the foods to be much higher than the thresholds set by the Food Safety and Standards Authority of India (FSSAI).

It further claimed that the thresholds have been drafted by the FSSAI but not notified yet.

Reacting to the study, the FSSAI said in a statement that it has been taking up the junk food regulations seriously and has already put up the draft notifications in public for comments.

"We have also issued an advisory to state government as well as our regional offices to look at the possibilities of implementing these regulations in the schools as well as ensure ban on junk food within the radius of 50 m.

Soon the draft notifications will be notified and we will look at the ways of implementation.

FSSAI is also working with schools as well as constituting an advisory committee who will look into the implementation," the FSSAI said in a statement.

"These samples were collected from grocery stores and fast food outlets in Delhi and are known to be widely sold and consumed across the country," the study said.

CSE director general Sunita Narain said consumers have the right to know what is contained in the package.

"We have found dangerously high levels of salt and fat in all the packaged food and fast food samples that we tested. We consumers have the right to know what is contained in the package. But our food regulator, the FSSAI, is dragging its feet and has not notified its own draft labelling regulation. This is clearly because of pressure from the powerful food industry. This is not acceptable. This is compromising our right to know and our right to health," she said.

She further claimed that the Food Safety and Standards Authority of India (FSSAI) is not notifying the labelling regulation as it is under pressure from the industries.

Narain's comment refers to the delay in notifying the draft Food Safety Standards, (Labelling and Display) Regulations, which has been in preparation since 2013.

"Over the six years, the FSSAI has constituted committee after committee and in 2018 a 'final' draft was issued; this was then revised and another 2019 final 'draft' was put out for public comments," she added.

Narain said the FSSAI must notify the draft immediately, taking into account nutrients mentioned in the 2018 draft ie salt, total fat and total sugar instead of sodium, saturated fat and added sugar.

"Consider a red octagon symbol that is easily interpreted and helps transcend the literacy and language barriers. Red warning labels should also be applicable to fast foods," she proposed, giving examples of Canada, Israel, Chile and Peru where packaged food is marked with similar labels.

If anybody destroys railway property shoot them at sight: MoS Railways Suresh Angadi

In a bid to build a robust EV charging infrastructure, state-run Energy Efficiency...

Rajinikanth says violence not the route but silent on CAA

Chennai: Actor Rajinikanth said violence should not be the route to solve any problem...

How many immigrants will benefit from Citizenship Act?...

Q: What is e-invoicing?A. The Government has announced new e-invoicing systems under...

A special court in Jaipur has convicted four accused in the 2008 Jaipur serial bomb...

JAIPUR: Payal Rohatgi, Bollywood actor who was arrested in a case relating to alleged...