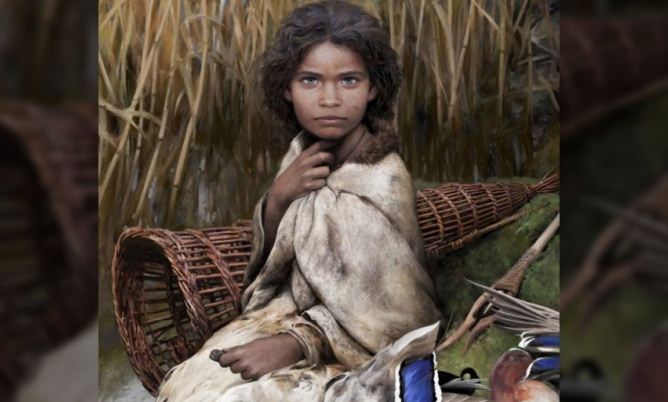 Researchers from the University of Copenhagen in Denmark have succeeded in extracting a complete human genome from the 5,700-year-old type of “chewing gum”, allowing them to recreate the image of its user and find clues to her dietary habits.

Based on the ancient human genome, the researchers could tell that the “chewing gum” made from the birch pitch was chewed by a woman.

She was genetically more closely related to hunter-gatherers from mainland Europe than to those who lived in central Scandinavia at that time, according to a study published in the journal Nature Communications.

They also found that she probably had dark skin, dark hair, and blue eyes.

“It’s amazing to have retrieved a complete ancient human genome from anything other than bone,” said lead researcher Hannes Schroeder, Associate Professor at the University of Copenhagen.

“What’s more, we also retrieved DNA from oral microbes and several important human pathogens, which makes this a very valuable source of ancient DNA, especially for a time where we have no human remains,” Schroeder said.

The birch pitch was found during archaeological excavations at Syltholm on the island of Lolland, Denmark.

The researchers also identified traces of plant and animal DNA in the pitch — specifically hazelnuts and duck — which may have been part of the individual’s diet. (IANS)

Large Asteroid to Fly By Earth Next Week: Here's What You Need to Know

Super-puffs: New class of exoplanets seen by Hubble have...

SRI NAGAR: Houseboat owners in Kashmir have suffered losses of over Rs 100 crores...

Director Sanjay Bhansali seems to be facing rough weather as far as the casting...

MUMBAI: Indian Hotel and Restaurant Association (AHAR) on Friday said they may have...

threatened to kill and molested in pune

Mumbai: A 24-year-old cab driver has been arrested for allegedly running over a...

Ahead of the general elections this year, the BJP promised a $5 trillion dream for...

What is Maharashtra government's stand on Citizenship Act:...